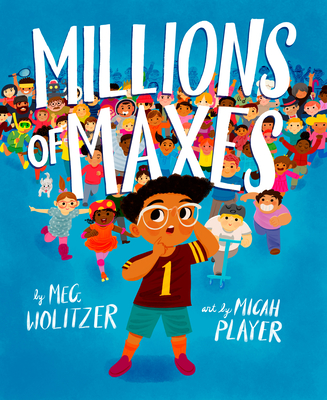 
On Our Shelves Now
Max discovers that uniqueness is more than just a name, in this funny, lively picture book debut by the bestselling author of The Interestings.

Max's room has his name all over it--on his blanket and night light and wall. His parents call him The One and Only Max. And so, he is in for a big surprise at the playground one day, when he hears "Max, time to go home!" and two other kids come running. He's not the one and only after all! How many Maxes are in the world?! Millions of Maxes?

But when he decides to help one of the other Maxes find her missing toy, he discovers that there are other ways to be special, and that he can appreciate the specialness of his new Max friends just as much as his own. That night he dreams of the future adventures he'll have with all of the Maxes he has yet to meet.
Meg Wolitzer was born in Brooklyn, New York, grew up in the town of Syosset, on Long Island, and sold her first novel, Sleepwalking, while a senior in college. She is the New York Times bestselling author of numerous novels for adults, including The Interestings, The Ten-Year Nap, The Wife, and The Female Persuasion; the young adult novel Belzhar; and the middle-grade novels The Fingertips of Duncan Dorfman and To Night Owl from Dogfish.

Micah Player studied Graphic Design at the University of Utah in Salt Lake City before moving to Southern California to work in the apparel industry. A former creative director of Paul Frank Industries, he now works as an illustrator of books and games. He lives with his family in a little house beneath a big tree in the mountains of Utah.
"The cheery aesthetic of Player (Paletero Man)—colors that pop, crisply rendered characters who wear their hearts on their sleeves as they run hither and yon—matches Wolitzer’s warm, knowing voice page for page, and Player’s varied digital compositions capture the visceral excitement of an action-packed day outside." —Publishers Weekly

"An excellent portrayal of a kid with a certain world view having it very much shaken. It models a helpful reaction for processing new information, reminding readers that they can believe one thing one day and learn something that alters that the next . . . With the added draw of cartoon-like art, this is a one-of-a-kind and entertaining picture book for all kinds of readers." —School Library Journal

"Wolitzer is a streamlined, effective storyteller in any format, and this sweet journey manages to pack a lot of messaging about friendship, uniqueness, and self-acceptance into its short pages . . . the reader cannot help but celebrate with the various Maxes as they discover that even with the same name, they’re still one in a million." —Booklist

"Whether a funny reflection on kids who have very common names, a rumination on the way everyone has unique traits that make them up, or a reminder that the world is much bigger than we think, this book is sure to please any kid that shares a name with one (or more) of their classmates." —BCCB