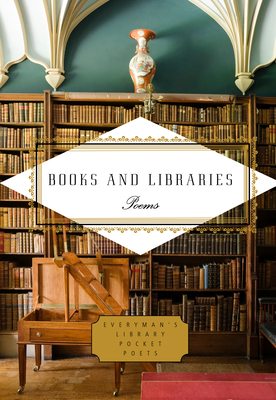 
On Our Shelves Now
An enchanting book about books: a beautiful hardcover Pocket Poets anthology that testifies to the passion books and libraries have inspired through the ages and around the world

Books have long captured the love, imagination, even the veneration, of readers everywhere. Emily Dickinson envisions these precious objects as “Frigates” that “take us Lands away”; Alberto Rios calls them “the deli offerings of civilization itself.” This affection extends to the hallowed gathering places of the written word: the libraries and bookshops where one can best hear “a choir of authors murmuring inside their books,” as Billy Collins has it.

A remarkably diverse treasury of literary celebrations, Books and Libraries is sure to take pride of place on the shelves of the book-obsessed.
ANDREW SCRIMGEOUR is Dean of Libraries Emeritus, Drew University, Madison, New Jersey. He is Archivist Emeritus of the Society of Biblical Literature and the founding archivist of the American Academy of Religion. His essays and short stories have been published in The New York Times.