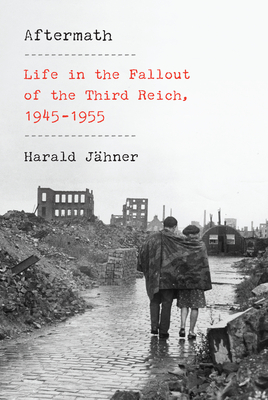 
Usually Ships in 1-5 Days
How does a nation recover from fascism and turn toward a free society once more? This internationally acclaimed revelatory history—"filled with first-person accounts from articles and diaries" (The New York Times)—of the transformational decade that followed World War II illustrates how Germany raised itself out of the ashes of defeat and reckoned with the corruption of its soul and the horrors of the Holocaust.

Featuring over 40 eye-opening black-and-white photographs and posters from the period.

The years 1945 to 1955 were a raw, wild decade that found many Germans politically, economically, and morally bankrupt. Victorious Allied forces occupied the four zones that make up present-day Germany. More than half the population was displaced; 10 million newly released forced laborers and several million prisoners of war returned to an uncertain existence. Cities lay in ruins—no mail, no trains, no traffic—with bodies yet to be found beneath the towering rubble.

Aftermath received wide acclaim and spent forty-eight weeks on the best-seller list in Germany when it was published there in 2019. It is the first history of Germany's national mentality in the immediate postwar years. Using major global political developments as a backdrop, Harald Jähner weaves a series of life stories into a nuanced panorama of a nation undergoing monumental change. Poised between two eras, this decade is portrayed by Jähner as a period that proved decisive for Germany's future—and one starkly different from how most of us imagine it today.
HARALD JÄHNER is a cultural journalist and former editor of The Berlin Times. He has been an honorary professor of cultural journalism at Berlin's University of the Arts since 2011. Aftermath, his first book, won the Leipzig Book Fair Prize in 2019.

SHAUN WHITESIDE is a translator of French, Dutch, German, and Italian literature. He has translated many works of nonfiction and novels, including Manituana and Altai by Wu Ming, The Weekend by Bernhard Schlink, Serotonin by Michel Houellebecq, and Magdalena the Sinner by Lilian Faschinger, which won him the Schlegel-Tieck Prize for German translation in 1997.
Shortlisted for the Baillie Gifford Prize • Shortlisted for the Cundill History Prize • A Best Book of the Year: New Statesmen, Financial Times, The Times, The Telegraph, the Irish Independent

“[Jähner] does double duty in this fascinating book, elegantly marshaling a plethora of facts while also using his critical skills to wry effect, parsing a country’s stubborn inclination toward willful delusion. Even though Aftermath covers historical ground, its narrative is intimate, filled with first-person accounts from articles and diaries.” —Jennifer Szalai, New York Times

“The national psyche is the principal protagonist in Harald Jähner’s subtle, perceptive and beautifully written Aftermath. Mr. Jähner, like Mr. Ullrich a German journalist and author, describes Germany’s first postwar decade, with more of an emphasis on its social and cultural landscape (particularly in its western segment) than the usual early Cold War tussles. Aftermath is a revelatory, remarkably wide-ranging book crammed with material, much of which will, I imagine, be new to an international audience.” —Andrew Stuttaford, The Wall Street Journal

“Harald Jähner’s highly readable account of how Germans went about leaving Nazism behind . . . is about the price and the accomplishment of a new beginning when the aggressive war the Germans had waged was reversed to utter defeat in 1945. . . . Jähner is counterintuitive but thoughtful.” —Peter Fritzsche, New York Times Book Review

“Erudite. . . . [Jähner] puts German anguish in the essential context of a nation climbing out of an abyss that it created. . . .  Aftermath is a reminder that the German experience will always stand apart.” —The Economist

“Jähner . . . sets out to complicate our picture of those tumultuous times. . . . [O]ften intriguing social and cultural history.”  —Julia Klein, The Forward

“Extraordinary. . . . One of the most evocative pieces of carefully researched history that I have ever read. It’s a remarkable piece of work.” —Cundill History Prize juror Misha Glenny, bestselling author of McMafia and The Balkans

“Aftermath is a quirky, sometimes humorous, and at times brilliant synthesis of a great deal of secondary literature, enhanced by quotations from published primary sources, extracts from works of creative literature and discussions of art and aesthetics.  There are some surprising twists of interpretation of otherwise familiar themes. . . . [A] thoughtful and readable account . . . deserves[s] a wide readership.”  —Mary Fulbrook, The Times Literary Supplement

“This is an important addition to the library of Holocaust literature.”  —New York Journal of Books

“In a fascinating and critical look at the period book-ended by World War II and the Cold War, German journalist Jähner effectively combines known and unfamiliar information about significant and ordinary events and people of the day with insightful discussions of contemporaneous art, literature, film, architecture, and film. Deeply researched while at the same time eminently readable, this book successfully presents an engrossing social, political, economic, and cultural perspective on an important era that is often overlooked in traditional history texts.”  —Library Journal (starred review)

“Harald Jähner’s Aftermath is a transfixing account and subtle analysis of Germany after the Second World War has ended. A scrupulous investigation of the past, it reads, constantly, like a prelude to what is still unfolding.” — Geoff Dyer, One of the Best Books of the 2021, New Statesman

“Germans rebounded from shattering defeat with hard work, a pragmatic embrace of the new, and a willful forgetting of trauma and guilt, according to this penetrating history of the early postwar period. . . . Elegantly written and translated, Jähner’s analysis deploys emotionally resonant detail . . . to vividly recreate a vibrant, if morally haunted, historical watershed. This eye-opening study enthralls.” —Publishers Weekly

“In his engrossing first book, Jähner, the former editor of the Berlin Times, examines how and why Germany was capable of radically transforming from a sinister fascist mindset toward a modern democratic state. The author presents an expansive yet sharply probing overview of the period, reaching across political, social, and geographical spheres to draw a lucid portrait of a country reeling from the stark consequences of being on the losing side of a horrendous war. . . . An immediate and long-lasting bestseller when it was published in Germany in 2019 and the winner of the Leipzig Book Fair Prize, Jähner’s shrewdly balanced look at postwar Germany is sure to spark the interest of readers across the world. An absorbing and well-documented history of postwar Germany.” —Kirkus Reviews (starred)

“A fiercely compelling book that brings vivid illumination to an era of twilight and brutal ruins. Harald Jähner beautifully explores the hinterland of human nature in all its shades.” —Sinclair McKay, author of Dresden: The Fire and the Darkness

“Harald Jähner’s deeply researched, panoramic account of how Germany rebuilt and discovered itself from 1945 to 1955 is an eye-opening, thrilling read.” —Bernhard Schlink, author of The Reader

“Exemplary [and] important. . . . This is the kind of book few writers possess the clarity of vision to write.” —Max Hastings, The Sunday Times (London)

“It is depressing to see how few countries encourage or even permit their citizens freely to chronicle and discuss their pasts, and how many instead forge fictional histories to support modern political purposes. In the U.S. and most of Europe, we take for granted a license to seek out truth. The Germans have an exemplary record, especially with regard to the mid-20th century, recently enhanced by Harald Jähner’s new book  Aftermath, on German life after 1945.” —Max Hastings, Bloomberg.com

“Aftermath . . . provides a compendium of universally human tales that make for a moving read. Jähner is masterly in telling the tragic, despicable, comedic, and uplifting stories of those who were there as he takes his readers on a fascinating tour of rubble-strewn postwar Germany.”  —Katja Hoyer, The Times (London)

“Harald Jähner’s magnificent book Aftermath (fluently translated by Shaun Whiteside) is part of this continuing process [of] Vergangenheitsbewältigung, roughly translated as ‘assessing the past.’ Drawing on the huge literature listed in the bibliography, it takes a lucid overview of the astonishing decade following the defeat of Nazism and the partition of Germany between the Western allies and Soviet Russia. Although it embraces subjects of explosive ideological controversy, the story is told with judicious impartial intelligence and a light touch: Jähner has no axe to grind and he casts his net wide, fully aware of the large patches of grey morality through which he is treading. There are great lessons in the nature of humanity to be learnt here.” —Rupert Christiansen, The Telegraph (London)

“An extraordinary book of breathtaking scholarship. Jähner shines a light on a dark and almost forgotten period of history to find it pulsating with life.” —Jack Fairweather, author of The Volunteer

“Many consider the years before 1945 to be the most crucial in understanding Germany and the Germans. Wait until you have read this book.” —Norman Ohler, author of Blitzed: Drugs in the Third Reich

“Harald Jähner claims to have discovered a hole in the heart of modern German history. This book triumphantly proves him right. It is absolutely extraordinary. Every page stops you dead with insight and revelation.” —James Hawes, author of The Shortest History of Germany

“For those who want to understand the Germans, Aftermath is essential reading. . . . Anyone with even the slightest interest in history and the human condition should read this book.″ —Julia Boyd, author of Travelers in the Third Reich

• Shortlisted for the Baillie Gifford Prize • A Best Book of the Year: New Statesmen, Financial Times, The Times, The Telegraph, the Irish Independent