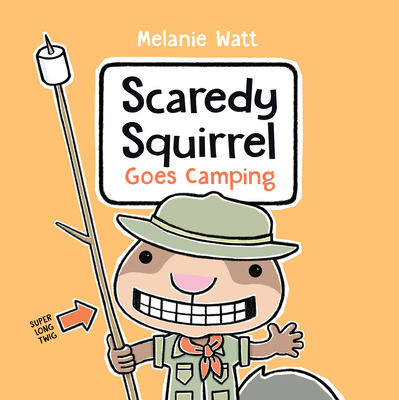 
Usually Ships in 1-5 Days
Scaredy Squirrel is exactly the squirrel your child needs--a little bit anxious, a lot adorable, and totally lovable. He likes the safety of his nut tree, but not so much the great outdoors. And he's about to go . . . camping?!

Scaredy Squirrel is cool with camping . . . as long as he can do it from his couch! Who wants to deal with mosquitos, dirt, and wild animals when he can experience nature on his brand-new TV? Except--uh-oh!--first he has to plug it in, which means LEAVING HIS TREE! Luckily, Scaredy's always got a plan. And he doesn't realize he might just explore the great outdoors along the way.

As young listeners see Scaredy face his fears in the silliest of ways, they gain perspective and courage, empowering them to tackle their own worries with a big smile.
Author and illustrator Melanie Watt is the bestselling creative genius behind many beloved picture books for children, including the Scaredy Squirrel series, the Chester series, Bug in a Vacuum, You're Finally Here!, Have I Got a Book for You! and Augustine. Melanie's books have received numberous starred reviews from journals including Publishers Weekly and Kirkus Reviews, and have won many state awards, including the Virginia Readers' Choice Award, North Carolina's Children's Book Award and Maryland's Black-Eyed Susan Award. The Scaredy Squirrel animated television series airs on the Cartoon Network in the US and YTV in Canada.
“His experiences may blaze a trail for readers with a similar aversion to venturing outdoors.” ―Booklist

“The irony of a wilderness-fearing squirrel that lives in the wilderness is especially funny in a camping-avoidance context, and the ending is nothing less than sublime.” ―Kirkus Reviews

“Kids with anxieties should find much to relate to in Scaredy’s humorous adventures.” ―School Library Journal