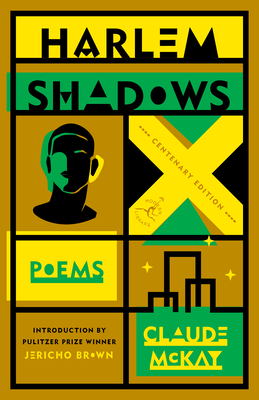 
On Our Shelves Now
A harbinger of the Harlem Renaissance first published in 1922, this collection of poignant, lyrical poems explores Claude McKay’s yearning for his Jamaican homeland and the bitter plight of Black and African Caribbean people in America—now with an introduction by Pulitzer Prize–winning poet Jericho Brown.

ONE OF THE MOST ANTICIPATED BOOKS OF 2022—Vulture

With pure heart, passion, and honesty, Claude McKay offers an acute reflection on the complex nature of racial identity in the Caribbean diaspora, encompassing issues such as nationalism, freedom of expression, class, gender, and sex. The collection’s eponymous poem, “Harlem Shadows,” portrays the struggle of sex workers in 1920s Harlem. In “If We Must Die,” McKay calls for justice and retribution for Black people in the face of racist abuse.

Juxtaposing the cacophony of New York City with the serene beauty of Jamaica, McKay urges us to reckon with the oppression that plagues a “long-suffering race,” who he argues has no home in a white man’s world. Poems of Blackness, queerness, desire, performance, and love are infused with a radical message of resistance in this sonorous cry for universal human rights. Simultaneously a love letter to the spirit of New York City and an indictment of its harsh cruelty, Harlem Shadows is a stunning collection that remains all too relevant one hundred years after its original publication.
Claude McKay (1889–1948) was a Jamaican-born writer, poet, and political activist. His first novel, Home to Harlem, a bestseller that won the Harmon Gold Award for Literature, was published in 1928. He wrote seven novels, two memoirs, short stories, poetry, and an essay collection entitled Harlem: Negro Metropolis. Harlem Shadows was among the first books published during the Harlem Renaissance.