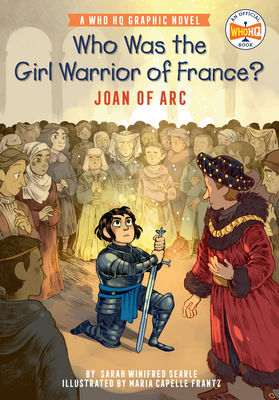 
On Our Shelves Now
Discover the story behind Joan of Arc and her journey to triumph in the Hundred Years' War in this captivating graphic novel  -- written by Sincerely, Harriet author Sarah Winifred Searle and illustrated by award-winning cartoonist Maria Capelle Frantz.

Presenting Who HQ Graphic Novels: an exciting new addition to the #1 New York Times Best-Selling Who Was? series!

Follow Joan of Arc on her journey to convince the Dauphin to let her lead the French army in the Battle of Orleans and win the Hundred Years' War. A story of faith, courage, and determination, this graphic novel invites readers to immerse themselves in the life of the teenage French heroine -- brought to life by gripping narrative and vivid full-color illustrations that jump off the page.
Sarah Searle originally hails from spooky New England but currently lives in sunny Perth, Australia. She writes and draws comics, best known for vulnerable memoir and compassionate fiction. Her first graphic novel Sincerely Harriet, a quiet middle-grade tale about a girl who discovers the power of storytelling while learning to manage chronic illness, debuted from Graphic Universe in May 2019. Find her around the web: @swinsea / swinsea.com

Maria Capelle Frantz was born and raised in Fairbanks, Alaska, where she spent the first years of her life playing in the woods, making up stories, and regularly perusing the local comic shop. In 2015, she was awarded a national gold medal in the Scholastic Art and Writing Awards, for her short comic "Death Wish." In 2017, her poster "The Golden Door" was chosen to be a part of Hank Green's Refugee Poster Project, alongside 15 other artists. Prints of artwork inspired by the refugee crisis were sold on dftba.com to help raise money for refugees in the United States. Her debut graphic novel, The Chancellor and the Citadel, was published by Iron Circus Comics in 2019.
"Joan of Arc’s faith and determination shine through in Who Was the Girl Warrior of France?, which gives readers background on the Hundred Years War and shows Joan of Arc’s challenging journey to help end it. All the [Who HQ Graphic Novels] showcase the passions and urgency or risks behind their headline-making events and humanize the people who made them possible." -- Booklist