Brave as a Mouse (Hardcover) 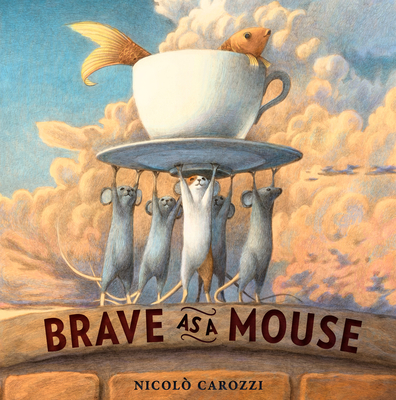 Brave as a Mouse (Hardcover)

“This book is downright wonderful! The illustrations are crisp and timeless, the story clever and fun. BRAVE AS A MOUSE feels like an instant classic.”
— Cristina Russell, Books & Books, Coral Gables, FL

The friendship of a goldfish and a mouse is in jeopardy when three not-so-friendly felines want to play too. This gorgeously illustrated picture book reminds us of the importance of bravery and friendship.

A goldfish and a mouse become fast friends as they play in and around the goldfish's bowl.

But when three cats crash the party and terrify the poor goldfish, the brave little mouse gets an idea. She leads the three black cats on a wild and epic chase up and down and over and around until they find themselves surrounded by absolutely irresistible food in the pantry. The cats gorge themselves so much that they fall into a deep sleep, but the mouse knows they won't sleep forever. So the brave little mouse gets another idea to keep the goldfish out of harm's way for good!

This is a heartwarming story with a simple text and gorgeous illustrations about the lengths one brave mouse will go to in order to save her friend.
Nicolò Carozzi is a Veronese architect, teacher, and illustrator. He was awarded first prize for the EurHope illustration competition in 2013, and has been a shortlisted illustrator for three Folio Society competitions. He made his illustration debut with the Italian picture book The Magic Lamp of Aladdin by Davide Calì. See more of his work at nicolocarozzi.com.
"Depicted in a palette of grays and earth tones, with blue accents, the characters are lifelike in both appearance and action. Carozzi's most effective technique, however, is his ability to pause the action at climactic points, forcing readers to wait (sometimes beyond a single page turn) before being reassured that all is well.” —Booklist; Starred Review

“An entertaining game of cat and mouse. And one lucky fish.” —The Horn Book