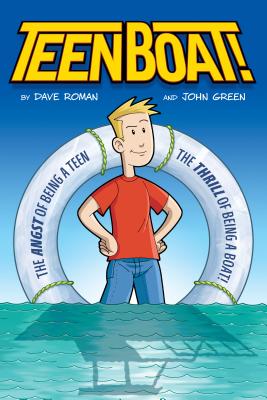 What is Teen Boat?! Here is what the co-creators say:

John Green: Teen Boat! is the story of a teenager with the power to turn into a yacht. It chronicles the trials and tribulations of being a teen and a boat, such as trying to fit in with the cool kids, struggling with acne (or in TB’s case, barnacles), being hijacked by pirates, crashing into icebergs, and going to detention. It’s the only comic that features the angst of being a teen and the thrill of being a boat!

Dave Roman: Teen Boat! asks the reader to go on a journey of self-discovery and transformation, highlighting the universal struggle between inner versus outer identity. Through the power of graphic narrative, it redefines the perceived boundaries between boat and teen, because in our hearts, Teen Boat is you and me. Also, there are jokes about dinghies.

The ANGST of being a Teen—the THRILL of being a Boat! For more laughs, don't miss the follow-up, Teen Boat! The Race for Boatlantis.

Dave Roman is the creator of the graphic novel series Astronaut Academy and Agnes Quill: An Anthology of Mystery. He has contributed stories to Comic Squad: Recess!,Explorer: The Lost Islands, and is the co-author of two New York Times bestselling graphic novels, X-Men: Misfits and The Last Airbender: Zuko’s Story. He is also the writer of Jax Epoch and the Quicken Forbidden, which he co-created with John Green when they were students at the School of Visual Arts. Dave worked as an editor for the groundbreaking Nickelodeon magazine and lives in New York City with his wife and fellow cartoonist, Raina Telgemeier. See more of Dave’s work at www.yaytime.com

John Green grew up on Long Island and has worked in New York City since graduating from the School of Visual Arts with a degree in graphic design. He was the comics consultant for Disney Adventures magazine and has also worked on comics for Nickelodeon, DreamWorks, Scholastic, DC Comics, and First Second Books. His latest project is Hippopotamister, his first graphic novel as both writer and artist. John lives in Brooklyn, and you can see more of his work at www.johngreenart.com.

"The cartoon illustrations are simple, bold, and accessible. Teens who clue in to the comic's self-aware goofiness will enjoy this title." — School Library Journal

"With chapters that are short, deliberately silly, and often hilarious, this book is a good grab for teens looking for a quick laugh." — Booklist

"Teen Boat takes a wacky concept and places it in the realm of high school life." — Voice of Youth Advocates (VOYA)