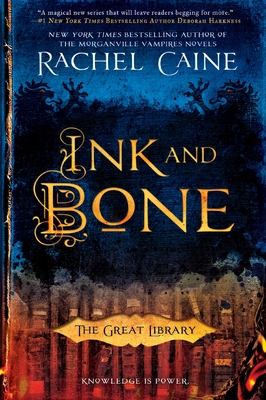 This is book number 1 in the The Great Library series.

In this exhilarating series, New York Times bestselling author Rachel Caine rewrites history, creating a dangerous world where the Great Library of Alexandria has survived the test of time.…

Ruthless and supremely powerful, the Great Library is now a presence in every major city, governing the flow of knowledge to the masses. Alchemy allows the Library to deliver the content of the greatest works of history instantly—but the personal ownership of books is expressly forbidden.

Jess Brightwell believes in the value of the Library, but the majority of his knowledge comes from illegal books obtained by his family. Jess has been sent to be his family’s spy, but his loyalties are tested in the final months of his training to enter the Library’s service.

When his friend inadvertently commits heresy by creating a device that could change the world, Jess discovers that those who control the Great Library believe knowledge is more valuable than any human life—and soon both heretics and books will burn....
Rachel Caine is the New York Times, USA Today, and international bestselling author of more than fifty novels, including the Stillhouse Lake series, the Weather Warden series, the Outcast Season series, the Revivalist series, and the Morganville Vampires series.
“Rachel Caine transports the reader to an imaginary future world where a Great Library controls all knowledge and the private ownership of printed books is a radical, dangerous practice.”—Deborah Harkness, #1 New York Times bestselling author of A Discovery of Witches

“Dark, riveting, heart-in-the-throat storytelling, with characters who caught me up and hold me even now.  A don't-miss read!”—New York Times Bestselling Author Tamora Pierce

“Caine has always given readers entertaining and interesting books…Fans will fall in love with Jess and want the next book out immediately.”—USA Today

“Caine’s elegantly detailed descriptions bring Jess’s world to vivid life in a fast-paced, action-oriented plot that will leave readers breathlessly anticipating not just the next page but the next book in the Great Library Series.”—Publishers Weekly (starred review)

“A thrill-a-minute adventure…This first entry into the Great Library series has pieces that mirror the excitement and bitterness of the Hunger Games series and contains some of the psychological elements of the Harry Potter books.”—Booklist (starred review)

“A strong cast of characters and nail-biting intensity make for a promising start to this series.”—School Library Journal

“A modern masterpiece…Fellow bibliophiles, expect to be some variation on struck—awestruck, dumbstruck, starstruck, maybe even thunderstruck…A new series to thrill every bookworm’s heart!”—Christian Science Monitor

"Caine's world where books and libraries dominate is not for the faint of heart...What's not to love? Imagine Harry Potter where the real magic is found within the pages of ancient texts. This book proves the adage that knowledge is power."—RT Book Reviews (4½ stars, top pick)