The Warlock (The Secrets of the Immortal Nicholas Flamel #5) (Paperback) 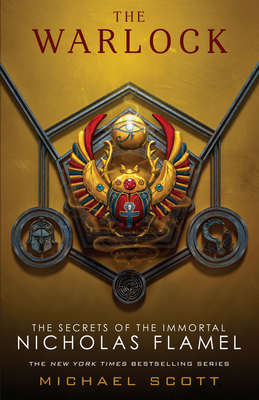 The Warlock (The Secrets of the Immortal Nicholas Flamel #5) (Paperback)

The Oaths: Many have made them.

The Betrayals: Almost as many will undo them.

The twins of prophecy have been divided--the end has begun.
Josh Newman has chosen a side, and he will not stand with his sister, Sophie, or the Alchemyst, Nicholas Flamel. He will fight alongside Dee and the mysterious Virginia Dare.
With San Francisco on the bring of ruin at the hands of Machiavelli, and Billy the Kid, Scatty, and Joan of Arc in another dimension called the Shadowrealm, the world stands at the edge of destruction. It is up to Sophie alone to find her twin before the battle begins pr all is lost—forever.

Read the whole series!
The Alchemyst
The Magician
The Sorceress
The Necromancer
The Warlock
The Enchantress

Michael Scott is an authority on mythology and folklore and one of Ireland’s most successful authors. A master of fantasy, science fiction, horror, and folklore, Michael has been hailed by the Irish Times as “the King of Fantasy in these isles.” He is the New York Times bestselling author of The Secrets of the Immortal Nicholas Flamel series: The Alchemyst, The Magician, The Sorceress, The Necromancer, The Warlock, and The Enchantress. You can follow Michael Scott on Twitter @flamelauthor and visit him at DillonScott.com.

★ “Readers will be swept up.” —Kirkus Reviews, Starred

“Fans of adventure fantasies like Rick Riordan’s Percy Jackson and the Olympians series will eat this one up.” —VOYA

“An exciting and impeccably thought-out fantasy, well-suited for those left in the lurch by Harry Potter’s recent exeunt.” —Booklist