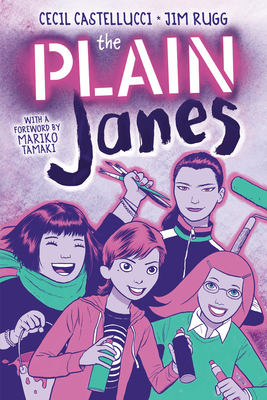 
Usually Ships in 1-5 Days
Meet the Plain Janes--artist activists on a mission to wake up their sleepy suburban town. This cult classic graphic novel is perfect for fans of The LumberJanes and Awkward.When artsy misfit Jane Beckles is forced to leave her beloved city life behind for the boring suburb of Kent Waters, she thinks her life is over. But then she finds where she belongs: at the reject table in the cafeteria, along with fellow misfits Brain Jayne, Theater Jane, and sporty Polly Jane. United by only two things-a shared name and frustration with the adults around them--the girls form a secret club dedicated to fighting suburban apathy with guerrilla works of art scattered around their small town.

But for Main Jane, the group is more than simple teenaged rebellion; it's an act of survival. She's determined not to let fear rule her life like it does her parents' and neighbors' lives. Armed with her sketchbook and a mission of resistance, the PLAIN Janes are out to prove that passion, bravery, and a group of great friends can save anyone from the hell that is high school.

With each installment printed in its own distinct color, this volume includes the original two stories--The Plain Janes and Janes in Love--plus a never-before-seen third story, Janes Attack Back. The Janes are back, and better than ever.

Cecil Castellucci is the author of books and graphic novels for young adults including Boy Proof, The Plain Janes, Soupy Leaves Home, The Year of the Beasts, Tin Star, Don't Cosplay With My Heart, and the Eisner nominated Odd Duck. In 2015 she co-authored Moving Target: A Princess Leia Adventure. She is currently writing Shade, The Changing Girl, an ongoing comic on Gerard Way's Young Animal imprint at DC Comics. Her short stories and short comics have been published in Strange Horizons, Tor.com, Womanthology, Star Trek: Waypoint and Vertigo SFX: Slam! She is the Children's Correspondence Coordinator for The Rumpus, a two-time Macdowell Fellow, and the founding YA Editor at the LA Review of Books. She lives in Los Angeles.
Jim Rugg is a comic book artist, bookmaker, illustrator, and designer. His books include Street Angel, The Plain Janes, Afrodisiac, Notebook Drawings, Rambo 3.5, and Supermag. He is a recipient of both the Eisner and Ignatz Awards and he teaches visual storytelling at the School of Visual Arts and the Animation Workshop in Denmark. He lives and draws in Pittsburgh.
Praise for The Plain JANES:
"Plain JANES brought me back to High School in the best way. It reminded me of the power of that time; the friendships, the growth, and the consequences. Cecil and Jim are clearly a powerful duo, and the work they've created is startlingly relevant to the world today."—Tillie Walden, Eisner Award winning author of Spinning and On a Sunbeam

"Castellucci imparts an infectious, punky energy to her female leads, which Rugg renders with humor and nuance."—Washington Post

"Castellucci (Boy Proof) and Rugg (co-creator of Street Angel) nimbly make their larger point-that fear is an indulgence we must give ourselves permission to overcome--without ever preaching..."—Publishers Weekly

"The story is filled with unforced insights about the role of art in our lives, and Jim Rugg's understated illustrations let these moments glimmer quietly on the page."—NPR's All Things Considered

"An old-school John Hughes movie in comic-book form...you'll most likely find yourself wishing there were more after you turn the last page."—IGN.com