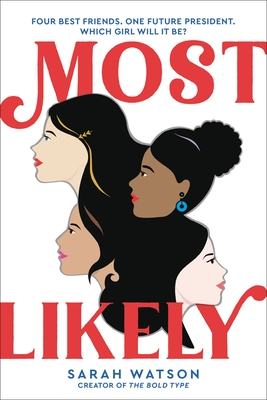 
Usually Ships in 1-5 Days
From the creator of the hit TV series The Bold Type comes an empowering and heartfelt novel about a future female president's senior year of high school.

Ava, CJ, Jordan, and Martha (listed in alphabetical order out of fairness)have been friends since kindergarten. Now they're in their senior year, facing their biggest fears about growing up and growing apart. But there's more than just college on the horizon. One of these girls is destined to become the president of the United States.The mystery, of course, is which girl gets the gig.

Is it Ava, the picture-perfect artist who's secretly struggling to figure out where she belongs? Or could it be CJ, the one who's got everything figured out . . . except how to fix her terrible SAT scores? Maybe it's Jordan, the group's resident journalist, who knows she's ready for more than their small Ohio suburb can offer. And don't overlook Martha, who will have to overcome all the obstacles that stand in the way of her dreams.

This is the story of four best friends who have one another's backs through every new love, breakup, stumble, and success -- proving that great friendships can help young women achieve anything . . . even a seat in the Oval Office.
Sarah Watson is the creator of the hit TV series The Bold Type, which the New York Times described as "Sex and the Single Girl for millennials." Previously she was a writer and executive producer of the critically acclaimed NBC drama Parenthood. She lives in Santa Monica, California. Most Likely is her debut novel.
* "Inspiring and heartwarming."—Kirkus Reviews, starred review

"Featuring an ethnically and socioeconomically varied cast, Watson's well-plotted debut delicately balances humor and weighty intersectional issues. Fast-paced action and sharp-witted dialogue prove to be a winning combination, drawing out suspense all the way to the presidential reveal."—Publishers Weekly

"Opens with a clever hook that will keep readers turning pages until the very end.... The dialogue is snappy and the plotting is sharp...considerable fun."—Booklist

"[A] delightfully entertaining, well-rounded and compelling story.... Each character has her own complex side plot, but banding together is what helps each of them discover and solidify her place in the world."
—USA Today

"This feel-good teen audiobook is a perfect blend of drama and intrigue.... Listeners will be rooting for all the amazing girls in this uplifting story."—AudioFile