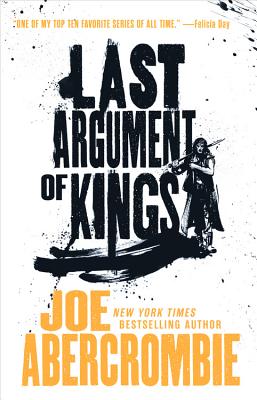 This is book number 3 in the The First Law Trilogy series.

Logen Ninefingers might only have one more fight in him -- but it's going to be a big one. Battle rages across the North, the king of the Northmen still stands firm, and there's only one man who can stop him. His oldest friend, and his oldest enemy: it's time for the Bloody-Nine to come home.

With too many masters and too little time, Superior Glokta is fighting a different kind of war. A secret struggle in which no one is safe, and no one can be trusted. As his days with a sword are far behind him, it's fortunate that he's deadly with his remaining weapons: blackmail, threats, and torture.

Jezal dan Luthar has decided that winning glory is too painful an undertaking and turned his back on soldiering for a simple life with the woman he loves. But love can be painful too -- and glory has a nasty habit of creeping up on a man when he least expects it.

The king of the Union lies on his deathbed, the peasants revolt, and the nobles scramble to steal his crown. No one believes that the shadow of war is about to fall across the heart of the Union. Only the First of the Magi can save the world, but there are risks. There is no risk more terrible, than to break the First Law. . .
Joe Abercrombie is the New York Times bestselling author of Red Country and the First Law trilogy: The Blade Itself, Before They Are Hanged, and Last Argument of Kings. He is a full-time writer and occasional freelance film editor who lives in Bath, England with his wife and three children.
"Bloody and relentless."—George R. R. Martin on Best Served Cold

"If you're fond of bloodless, turgid fantasy with characters as thin as newspaper and as boring as plaster saints, Joe Abercrombie is really going to ruin your day. A long career for this guy would be a gift to our genre."—Scott Lynch, author of The Lies of Locke Lamora

"[Abercrombie has] begun breaking his own rules. And succeeding wildly at it. ... [R]arely has Abercrombie had so much fun while rollicking through his colorful cast's foibles and witty dialogue - and rarely has he dished out so much straight-for-the-heart poignancy."—The A.V. Club