The Wisdom of Crowds (The Age of Madness #3) (Paperback) 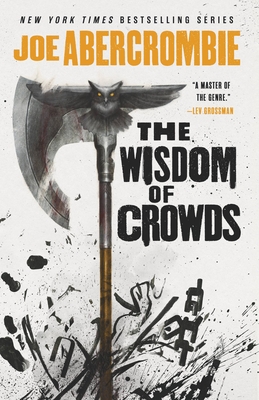 The Wisdom of Crowds (The Age of Madness #3) (Paperback)

This is book number 3 in the The Age of Madness series.

From the New York Times bestselling author of A Little Hatred comes a stunning fantasy novel that finds the world in an unstoppable revolution where heroes have nothing left to lose as darkness and destruction overtake everything.

Some say that to change the world you must first burn it down. Now that belief will be tested in the crucible of revolution: the Breakers and Burners have seized the levers of power, the smoke of riots has replaced the smog of industry, and all must submit to the wisdom of crowds.

With nothing left to lose, Citizen Brock is determined to become a new hero for the new age, while Citizeness Savine must turn her talents from profit to survival before she can claw her way to redemption. Orso will find that when the world is turned upside down, no one is lower than a monarch. And in the bloody North, Rikke and her fragile Protectorate are running out of allies . . . while Black Calder gathers his forces and plots his vengeance.

The banks have fallen, the sun of the Union has been torn down, and in the darkness behind the scenes, the threads of the Weaver's ruthless plan are slowly being drawn together . . .

"A master of his craft." —Forbes

"No one writes with the seismic scope or primal intensity of Joe Abercrombie." —Pierce Brown

For more from Joe Abercrombie, check out:

The Shattered Sea Trilogy
Half a King
Half a World
Half a War
Joe Abercrombie was born in Lancaster in 1974, spent much of his youth in imaginary worlds, and left school with a good idea of how to make stuff up. After graduating from Manchester University he worked as a TV editor, but he never stopped making stuff up, and his first book, The Blade Itself, was published in 2006. He has since written eight more novels and a collection of stories in his First Law and Shattered Sea series. He lives in Bath with his wife Lou and their three children Grace, Eve and Teddy, and makes stuff up full-time.
"A master of the genre."—Lev Grossman, #1 New York Times bestselling author

"Abercrombie’s fans will be satisfied with this morally complex conclusion in which even the victorious few know that, in the end, '[e]very victory turns out to be just another defeat."—Booklist on The Wisdom of Crowds

"The Wisdom Of Crowds is the perfect—if slightly depressing—conclusion to an excellent trilogy that pushes this series into bold new territory."—Forbes on The Wisdom of Crowds

"With its thoughtful exploration of differing approaches to governance and rich, action-packed plot, this epic fantasy makes a fitting series close."
—Publishers Weekly on The Wisdom of Crowds

"Abercrombie's satisfying plotting and expert subversion of genre expectations are sure to please. Readers will be gripped."—Publishers Weekly on The Trouble With Peace

"Abercrombie squeezes your heart till it matches his beat. No one writes with the seismic scope or primal intensity of Joe Abercrombie."—Pierce Brown, #1 New York Times bestselling author, on A Little Hatred

"Abercrombie continues to do what he does best . . . Buckle your seat belts for this one . . . . A vivid and jolting tale."—Robin Hobb, New York Times bestselling author, on A Little Hatred

"Say one thing for Joe Abercrombie, say that he's a master of his craft."—Forbes on A Little Hatred

"A Little Hatred is Abercrombie at his very best: witty, wise, and whip-smart. Masterfully plotted . . . . I had high hopes for this book, and it exceed them all."—Nicholas Eames, author of Kings of the Wyld, on A Little Hatred