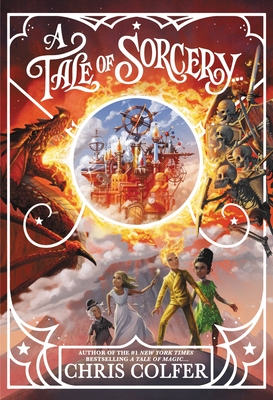 This is book number 3 in the A Tale of Magic... series.

As the doors were pushed, flames and magma spewed out from between the cracks, offering glimpses into the world of fire and chaos beyond them.

Brystal Evergreen is running out of time. It has been almost one year since she made a deal with Death to find and destroy the Immortal in exchange for her life. But she still hasn’t found a single clue about who or where the Immortal is. To make matters worse, something dark and malignant has risen from deep within the earth, threatening life as we know it.

To stop this new evil, the fairies and witches must work with all the kingdoms and territories, including the Righteous Brotherhood and their Army of the Dead. But is the threat more familiar than they expected? And why is a secretive group of Sorcerers convinced that Xanthous Hayfield is connected to it?

Sorcery, magic, and science collide in this thrilling third book in the Tale of Magic… series that will keep readers on the edge of their seats.

Chris Colfer is a #1 New York Times bestselling author and Golden Globe-winning actor. He was honored as a member of the TIME 100, Time magazine’s annual list of the one hundred most influential people in the world, and his books include Struck By Lightning: The Carson Phillips Journal, Stranger Than Fanfiction, the books in The Land of Stories series: The Wishing Spell, The Enchantress Returns, A Grimm Warning, Beyond the Kingdoms, An Author’s Odyssey, and Worlds Collide, the companion books A Treasury of Classic Fairy Tales, The Mother Goose Diaries, Queen Red Riding Hood’s Guide to Royalty, The Curvy Tree, Trollbella Throws a Party, and Goldilocks: Wanted Dead or Alive, and the books in the A Tale of Magic… series: A Tale of Magic…, A Tale of Witchcraft…, and A Tale of Sorcery…. He invites you to visit him online at thelandofstories.com or on Instagram and Twitter @chriscolfer.