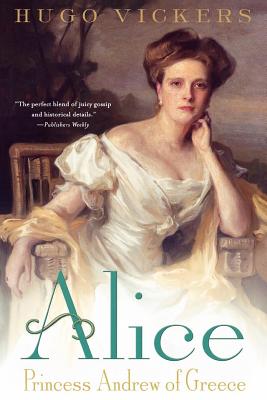 Hugo Vickers's Alice is the remarkable story of Princess Andrew of Greece, whose life seemed intertwined with every event of historical importance in twentieth century Europe.

"In 1953, at the coronation of Queen Elizabeth II, Princess Alice was dressed from head to foot in a long gray dress and a gray cloak, and a nun's veil. Amidst all the jewels, and velvet and coronets, and the fine uniforms, she exuded an unworldly simplicity. Seated with the royal family, she was a part of them, yet somehow distanced from them. Inasmuch as she is remembered at all today, it is as this shadowy figure in gray nun's clothes..."

Princess Alice, mother of Prince Phillip, was something of a mystery figure even within her own family. She was born deaf, at Windsor Castle, in the presence of her grandmother, Queen Victoria, and brought up in England, Darmstadt, and Malta.

In 1903 she married Prince Andrew of Greece and Denmark, and from then on her life was overshadowed by wars, revolutions, and enforced periods of exile. By the time she was thirty-five, virtually every point of stability was overthrown. Though the British royal family remained in the ascendant, her German family ceased to be ruling princes, her two aunts who had married Russian royalty had come to savage ends, and soon afterwards Alice's own husband was nearly executed as a political scapegoat.

The middle years of her life, which should have followed a conventional and fulfilling path, did the opposite. She suffered from a serious religious crisis and at the age of forty-five was removed from her family and placed in a sanitarium in Switzerland, where she was pronounced a paranoid schizophrenic. As her stay in the clinic became prolonged, there was a time where it seemed she might never walk free again. How she achieved her recovery is just one of the remarkable aspects of her story.

Hugo Vickers was born in 1951 and educated at Eton and Strasbourg University. His books include Gladys, Duchess of Marlborough; Cecil Beaton; Vivien Leigh; Loving Garbo; Royal Orders; The Private World of the Duke and Duchess of Windsor; and The Kiss, which won the 1996 Stern Silver Pen for Non-fiction. He is an acknowledged expert on the royal family, appears regularly on television, and has lectured all over the world. Hugo Vickers and his family divide their time between London and a manor house in Hampshire.

"By crafting the perfect blend of juicy gossip and historical details, Vickers makes it abundantly clear why Alice deserves to be known as more than just the queen's mother-in-law."—Publishers Weekly