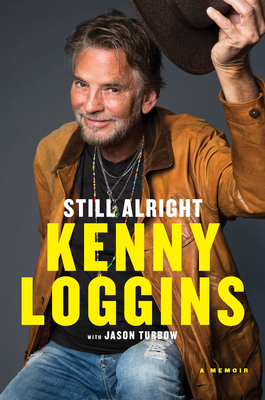 By Kenny Loggins, Jason Turbow (With)


On Our Shelves Now
You know Kenny Loggins for his megahit soundtrack themes and chart-topping collaborations. Now you can know him through the intimate stories behind his five-decade career as a legendary songwriter and pop icon.

In a remarkable career, Kenny Loggins has rocked stages worldwide, released ten platinum albums, and landed hits all over the Billboard charts. His place in music history is marked by a unique gift for collaboration combined with the vision to evolve, adapt, and persevere in an industry that loves to eat its own. Loggins served as a pivotal figure in the folk-rock movement of the early ’70s when he paired with former Buffalo Springfield member Jim Messina, recruited Stevie Nicks for the classic duet “Whenever I Call You ‘Friend,’” then pivoted to smooth rock in teaming up with Michael McDonald on their back-to-back Grammy-winning hits “What a Fool Believes” and “This Is It” (a seminal moment in the history of what would come to be known as yacht rock). In the ’80s, Loggins became the king of soundtracks with hit recordings for Caddyshack, Footloose, and Top Gun; and a bona fide global superstar singing alongside Bruce Springsteen and Michael Jackson on “We Are the World.”

In Still Alright, Kenny Loggins gives fans a candid and entertaining perspective on his life and career as one of the most noteworthy musicians of the 1970s and ’80s. He provides an abundance of compelling, insightful, and terrifically amusing behind-the-scenes tales. Loggins draws readers back to the musical eras they’ve loved, as well as addressing the challenges and obstacles of his life and work—including two marriages that ended in divorce, a difficult but motivating relationship with the older brother for which “Danny’s Song” is named, struggles with his addiction to benzodiazepines, and the revelations of turning seventy and looking back at everything that has shaped his music—and coming to terms with his rock-star persona and his true self.
Kenny Loggins emerged with Loggins & Messina, one of the bestselling musical duos of the 1970s, with their six releases between 1971 and 1976 (plus three live albums and four compilations), counting for 16 million units sold. Loggins has released 14 solo records since then with more than 25 million albums sold, charted five top-10 singles, and won two Grammy Awards for “What A Fool Believes” and “This Is it,” and received one Academy Award nomination for “Footloose.” Loggins’ song “Conviction of the Heart” was hailed as the “unofficial anthem of the environmental movement” by Vice President Al Gore, and his environmental television special for the Disney Channel, This Island Earth, won Emmy Awards for Outstanding Achievement in Writing and for the title track.

Loggins has also cut two live albums, two greatest-hits compilations, and three children’s records including Return to Pooh Corner, which remains the bestselling children’s album of the last two decades. He recently donated use of his single “The Great Adventure” to the San Diego Zoo for their Kids TV network which airs in children’s hospitals and Ronald McDonald Houses around the world, supporting his belief that “every child should experience the healing power of music.” Known as “The Soundtrack King,” Loggins has had his music featured in several iconic films including Footloose, Caddyshack, and Top Gun. Loggins has millions of followers and listeners across social and streaming platforms and continues to sell out live shows both domestically and internationally.

Jason Turbow is the author of the bestselling The Baseball Codes: Beanballs, Sign Stealing, and Bench-Clearing Brawls, as well as Dynastic, Bombastic, Fantastic, about the Swingin’ A’s of the 1970s, and They Bled Blue, about the 1981 Los Angeles Dodgers. He has written for the New York Times, the Wall Street Journal, and Wired, among many publications.
“A wonderfully written book…very honest and very entertaining.”—Geoff Edgers, The Washington Post

"Legendary songwriter Loggins brings the energy of his live performances to the page in this exhilarating look at his career.... Loggins’ frank reflections on his craft are what beg an encore.... Fans won’t want to skip this one."—Publishers Weekly

“Loggins’ thoughtful reflections on the process of songwriting turn this memoir into more than a run-of-the-mill rocker’s reflections on a life of sex, drugs, and, oh yeah, rock and roll. Songwriting occupies the center of Loggins’ narrative…His appealing memoir celebrates him home in fine form.”—No Depression