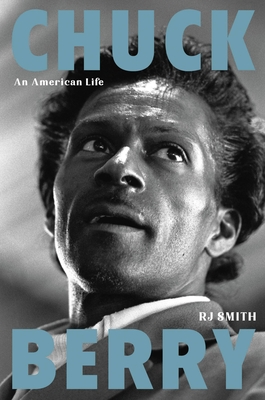 
On Our Shelves Now
The definitive biography of Chuck Berry, legendary performer and inventor of rock and roll

Best known as the groundbreaking artist behind classics like “Johnny B. Goode,” “Maybellene,” “You Never Can Tell” and “Roll Over Beethoven,” Chuck Berry was a man of wild contradictions, whose motives and motivations were often shrouded in mystery. After all, how did a teenage delinquent come to write so many songs that transformed American culture? And, once he achieved fame and recognition, why did he put his career in danger with a lifetime’s worth of reckless personal behavior? Throughout his life, Berry refused to shed light on either the mastery or the missteps, leaving the complexity that encapsulated his life and underscored his music largely unexplored—until now.

In Chuck Berry, biographer RJ Smith crafts a comprehensive portrait of one of the great American entertainers, guitarists, and lyricists of the 20th century, bringing Chuck Berry to life in vivid detail. Based on interviews, archival research, legal documents, and a deep understanding of Berry’s St. Louis (his birthplace, and the place where he died in March 2017), Smith sheds new light on a man few have ever really understood. By placing his life within the context of the American culture he made and eventually withdrew from, we understand how Berry became such a groundbreaking figure in music, erasing racial boundaries, crafting subtle political commentary, and paying a great price for his success. While celebrating his accomplishments, the book also does not shy away from troubling aspects of his public and private life, asking profound questions about how and why we separate the art from the artist.

Berry declined to call himself an artist, shrugging that he was good at what he did. But the man's achievement was the rarest kind, the kind that had social and political resonance, the kind that made America want to get up and dance. At long last, Chuck Berry brings the man and the music together.

RJ Smith has been a senior editor at Los Angeles Magazine, a contributor to Details, a columnist for The Village Voice, a staff writer for Spin, and has written for GQ, New York Times Magazine, Elle, and Men's Vogue. His book The One: The Life and Music of James Brown was among the New York Times' "100 Notable Books of 2012." Smith lives in Cincinnati.
**Rolling Stone, "Best Music Books of 2022"**

“[An] unsparing but revelatory account of an American original... as smart and punchy as a mono Berry 45.” —Wall Street Journal

“To some degree, all rock bios are about sex, drugs and rock-and-roll, yet the biggest takeaway from Chuck Berry has to do with a fourth element: sheer force of personality... Berry liked to compose with other musicians, throwing words and riffs out and moving slowly till a critical mass that had been long in making seemed to arrive out of nowhere. RJ Smith writes in much the same manner, taking a song like ‘Nadine’ from a sketchy beginning to its masterful completion.”
—Washington Post

“RJ Smith brings Berry to vivid life, doubly impressive given his subject’s legendary caginess. He lays the terrain so adroitly — from Berry’s St. Louis youth to his multiple imprisonments — that when tiny bombs go off, he doesn’t have to explain that they’re bombs; they resonate. Smith is also first-rate on the electric guitar’s galvanic effect on music and the culture at large.”—Rolling Stone

"[A] rollicking bio ripe with the thrill of mythology."—Chicago Tribune

“Definitive, highly readable, and unusually revealing, this biography gives us the remarkable Chuck Berry in full.”—New York Journal of Books

“Chuck Berry gives readers background on those songs and his music, of course. But where it really succeeds is plumbing the psychological depths and driving forces of its subject in a deeper and richer way than ever before… Chuck Berry’s music will likely never pass away. And with Chuck Berry: An American Life, there’s finally a multi-faceted biography for an even more faceted man.”
—Houston Press

"So much the best [biography of Chuck Berry]... a rich book, full of tales and details and contradictions."—And It Don't Stop

"Smith’s book is rich, enticing, its endless details never weighing down the story he has found: that Chuck Berry spent his whole life refighting and rewriting the Civil War."—Greil Marcus' Letter in the Ether

"Smith’s book is both a corrective and complement to Berry’s 1987 autobiography...The best life of Berry in several years."

"This account may become the standard biography that may appeal to general readers. Smith lauds Berry’s accomplishments in music but also characterizes him as a lonely, self-destructive, moody, and aggressively sexual man."—Library Journal

“RJ Smith’s Chuck Berry is a brilliant deep dive into the life of the true King of Rock & Roll. The irascible Berry shaved with a blow torch and played guitar like a possessed wizard from the Great American Highway. In unexpected ways Berry was a civil rights revolutionary with songs as his artillery. Smith’s fresh anecdotes, musicologist erudition, and page-turning prose is awesome. This is a must-read!”—Douglas Brinkley, author of Silent Spring Revolution

“Chuck Berry was one of the first people I knew that was true to life. Just like this book showing the truth to his life. I knew him from the 1950s onward and I can honestly say that RJ truly captured the essence of Chuck Berry as I knew him. You couldn’t have a better book on the life and career of my ol’ friend.”—Bobby Rush, GRAMMY Award Winning blues artist, Blues Hall of Famer, and author of I Ain’t Studdin’ Ya

“Chuck Berry is both a national monument and something of an enigma. RJ Smith convincingly connects those two points in his scrupulous account, which is impressively detailed but never dull, and rich in the textures of time, place, personality, and sound. You'll want to read every word.”—Lucy Sante, author of Low Life, The Other Paris, and Maybe the People Would Be the Times

“A hungry ear drives Smith's wondrous, brilliant book. Not only does he capture the excitement of Berry's music, he hears the awe of those in its thrall, from his rock & roll heirs to rivals, fans, and mystified bystanders throughout the twentieth century. Smith writes history as though it's a series of tall tales--how else to conjure Berry's brilliance as well as complexities, the unheralded highs and lows, the myth and the man, the man and the strange nation that produced him.”—Hua Hsu, staff writer at the New Yorker and author of Stay True

“Chuck Berry is a necessary book that expands and beautifully complicates our understanding of Berry as a human and as an artist.”—Jessica Hopper, author of The First Collection of Criticism by a Living Female Rock Critic

“No one writes about popular music and its icons quite like RJ Smith: his ability to see inside the psyche of the most enigmatic figures, to reveal the soft tissue connecting them to cultural context, to deconstruct how a song actually works, all with prose that borders on poetry. Chuck Berry is a masterwork.”—Dan Charnas, author of Dilla Time and The Big Payback