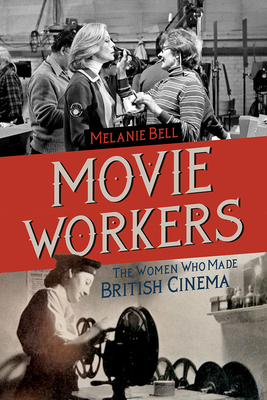 After the advent of sound, women in the British film industry formed an essential corps of below-the-line workers, laboring in positions from animation artist to negative cutter to costume designer. Melanie Bell maps the work of these women decade-by-decade, examining their far-ranging economic and creative contributions against the backdrop of the discrimination that constrained their careers. Her use of oral histories and trade union records presents a vivid counter-narrative to film history, one that focuses not only on women in a male-dominated business, but on the innumerable types of physical and emotional labor required to make a motion picture. Bell's feminist analysis looks at women's jobs in film at important historical junctures while situating the work in the context of changing expectations around women and gender roles.

Illuminating and astute, Movie Workers is a first-of-its-kind examination of the unsung women whose invisible work brought British filmmaking to the screen.

Melanie Bell is a professor of film history in the School of Media and Communication at the University of Leeds. Her books include Julie Christie: Stardom and Cultural Production and Femininity in Frame: Women and 1950s British Popular Cinema.
"This is a very important book. It is no exaggeration to say that it totally re-writes the labour history of the British film industry. . . . Methodologically precise." --Historical Journal of Film, Radio and Television

"This important study acts as a political weapon, a much-needed act of recovery and a revision of British film history." --Times Literary Supplement


"Eye-opening and disruptive, this counter-narrative (spliced together from oral histories, trade union records, and more) is a trove of trivia and untold truths. Highlighting the often-unseen but important accomplishments of women in film, this is a comprehensive, necessary addition to any cinephile’s collection." --Library Journal (starred review)

"Bell's excellent new book creates a narrative that is both shocking and exhilarating, revealing staggering levels of discrimination but also the skill, the joy and the immense value of women's work in film. . . . Movie Workers is a wonderful book." --Women's History Review


"A revelatory study. This book not only challenges traditional film history by demanding gender sensitive attention to roles in film production normally ignored, but it changes conceptions of creativity to embrace a more complex understanding of the collaborative processes involved as opposed to the established conception of the director's authorial vision."--Christine Gledhill, co-editor of Doing Women's Film History: Reframing Cinemas, Past and Future

“Melanie Bell describes Movie Workers as a history that aims to ‘disrupt the present’ and she has done just that. Marshalling a rich array of evidence from trade union records, oral histories, and contemporaneous sources, Bell uncovers the essential work that women have performed at all levels of the British film industry for decades—work rendered invisible in traditional histories which have for too long glorified film directors as solitary creative geniuses and stubbornly refused to recognize feminized labor as labor.”--Shelley Stamp, author of Lois Weber in Early Hollywood

"This excellent example of a multidisciplinary history sheds a great deal of light on a topic that has been difficult to study." --Choice