Life of Zarf: The Trouble with Weasels (Paperback) 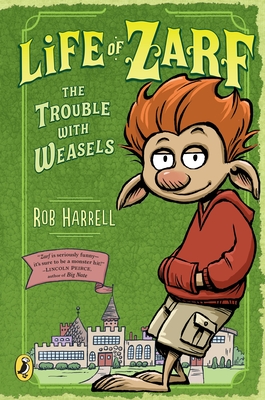 Life of Zarf: The Trouble with Weasels (Paperback)

This is book number 1 in the Life of Zarf series.

"A Wimpy Kid format with a fairy-tale twist? Yes, this is bound to be a hit." --Booklist

Shrek meets Dork Diaries in this comic novel of a troll trying to figure out how to be more popular.

It’s not easy being Zarf. As a troll, he's stuck at the bottom of the middle school hierarchy, way below the prince and knights (populars), ogres and giants (jocks), and even the lowly minstrels (band geeks). Plus, trolls aren't exactly known for their brain power or cool demeanor. But it gets worse. When the king disappears and Zarf's archenemy, the prince, ascends the throne, he makes Zarf's life even more miserable. And so it is that Zarf and his two sidekicks (a neurotic, mutton-obsessed pig and the not-funny son of the court jester) set out to find the missing king as well as their way to middle school heroism. (Okay, the heroism part might be wishful thinking.)

The first book in this brilliant new illustrated series from comics creator Rob Harrell is perfect for fans of fractured fairytales and the Land of Stories series.
Rob Harrell writes and draws the long-running daily comic strip Adam@Home, which appears in more than 140 papers worldwide. He also created and drew the internationally syndicated comic strip Big Top until 2007. Rob recently published his first middle grade graphic novel, Monster on the Hill, which Kirkus called a "deliciously cinematic...indie charmer" in a starred review. He lives with his wife in Austin, Texas.
"Entertainingly goofy. A promising series kickoff full of off-kilter action and humor." — Publishers Weekly

"A Wimpy Kid format with a fairy-tale twist? Yes, this is bound to be a hit." —Booklist