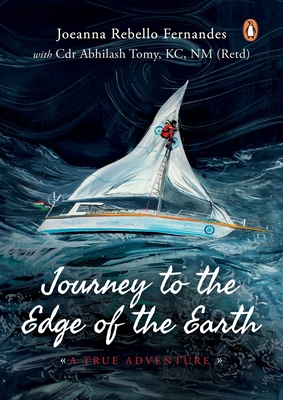 Travel far and wide with an Indian sailor and his endless love for the sea!

Imagine an infinite blue ocean and somewhere in the middle of it, tossed by wind and wave-a single boat. In it a solitary sailor.

This is the gritty, glorious and true adventure of Commander Abhilash Tomy, a former officer of the Indian Navy, who in 2012 set off on the journey of a lifetime. Without once stopping by land, he circumnavigated the world alone for 151 days, encountering deathly perils on choppy waters! No other Indian had sailed like this before. When he finally returned to India, Abhilash was awarded the Kirti Chakra for his heroism.

Dive right into this rousing tale of a real-life hero whose ambition, courage, and determination to circle the world on his little boat, will fire up your imagination. And as you travel with Abhilash across the ocean, learn about famous ships and sailors, legends and maps, winds and currents, and a score and more fascinating stories about our world of water.

Joeanna Rebello Fernandes has worked for over a decade as a features writer with The Sunday Times of India, across Mumbai, Chennai and Delhi. She is the author of the children's book Treasure at the Train Station: A Mumbai Adventure (2018), a fantasy set in Victoria Terminus. A freelance writer and editor, she was an editor with Goodearth Publications and was involved in commissioning and editing children's books. She has a Master's in English Literature and a Bachelor's in Mass Media from the University of Mumbai.

Cdr Abhilash Tomy KC, NM is a retired officer of the Indian Navy. He was the first Indian to complete a solo, non-stop circumnavigation of the world under sail in 2013. Cdr Abhilash Tomy also competed in the 2018 Golden Globe Race. He is decorated with the Kirti Chakra, the Nau Sena Medal, the Tenzing Norgay National Adventure Award and the MacGregor Medal for military reconnaissance. He is the recipient of an honorary doctorate.