Charlie’s Good Tonight: The Life, the Times, and the Rolling Stones: The Authorized Biography of Charlie Watts (Hardcover) 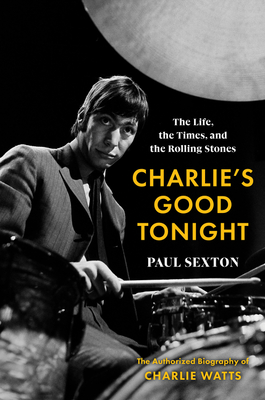 Charlie’s Good Tonight: The Life, the Times, and the Rolling Stones: The Authorized Biography of Charlie Watts (Hardcover)

The fully authorized and official biography of legendary Rolling Stones drummer Charlie Watts, one of the world’s most revered and celebrated musicians of the last half century.

Charlie Watts was one of the most decorated musicians in the world, having joined the Rolling Stones, a few months after their formation, early in 1963.

A student of jazz drumming, he was headhunted by the band after bumping into them regularly in London’s rhythm and blues clubs. Once installed at the drum seat, he didn’t miss a gig, album or tour in his 60 years in the band. He was there throughout the swinging sixties, the early shot at superstardom and the Stones' world conquest; and throughout the debauchery of the 1970s, typified by 1972's Exile on Main St., considered one of the great albums of the century. By the 1980s, Charlie was battling his own demons, but emerged unscathed to enhance his unparalleled reputation even further over the ensuing decades.

Watts went through band bust-ups, bereavements and changes in personnel, managers, guitarists and rhythm sections, but remained the rock at the heart of the Rolling Stones for nearly 60 years—the thoughtful, intellectual but no less compelling counterpoint to the raucousness of his bandmates Keith Richards, Mick Jagger and Ronnie Wood. And this is his story.

Paul Sexton started writing about music as a teenager in 1977. His work has appeared in The Times (London), the Daily Telegraph, the Guardian, Billboard, and numerous other publications. He has made many documentaries and shows as a presenter and producer for BBC Radio 2, and is also the author of Prince: A Portrait of the Artist in Memories and Memorabilia. He lives in South London.

"An affectionate portrait, one that recognizes Watts as musician, colleague, family man, obsessive collector and immaculate dresser." — The Sunday Times

"A book as gentle, fascinating and companionable as the man himself." — Mojo

"Favors substance over flash, presenting an affectionate account of a devoted family man and friend, a particularly British type of eccentric, who just happened to play drums for the Rolling Stones." — Irish Independent