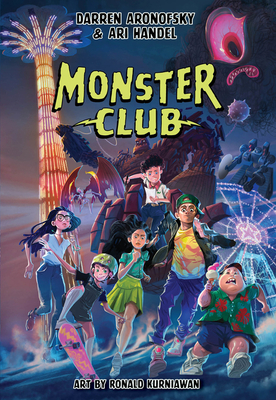 From the award-winning screenwriter-director Darren Aronofsky and his screenwriting partner, Ari Handel, comes Monster Club. Their debut novel is the first book in a thrilling, new adventure series about growing up, letting go, and facing down your monsters.

Like almost everything in eleven-year-old Eric “Doodles” King’s life, King’s Wonderland—the amusement park his great-great grandfather founded—was seriously damaged when a hurricane hit his beloved Coney Island neighborhood. Now hungry property developers are circling the wreckage of the once-awesome King’s Wonderland, and Eric’s family is falling apart from the threat of losing it all.

If it weren’t for Monster Club—the epic roleplaying game that Eric and his friends created—Eric’s life would be pretty terrible. Drawing his favorite monster battling with his best friends’ creations is the one thing that still gets Eric excited. So when his friends start to think of Monster Club as a kid’s game and get more interested in other things, Eric just can’t deal. But then Eric happens across a long-lost vial of magic ink that brings their monster drawings to life, and suddenly, Monster Club isn’t just for fun anymore.

The monsters Eric and his friends created are wreaking havoc across Coney, and it’s on the Monster Club to save their city, the amusement park, and maybe, just maybe, Eric’s family, too. It’s a hilarious, heartfelt adventure from the creative minds of Darren Aronofsky and Ari Handel that fans of Last Kids on Earth and Spy School are sure to love.

Darren Aronofsky is a Coney Island–raised, Academy Award–nominated screenwriter, director, and producer. He is best known for his surreal, high-concept work in films like Requiem for a Dream, Black Swan, The Wrestler, and mother!

Ari Handel is a scientist, writer, producer, and storyteller. He and Darren Aronofsky have worked together for more than twenty years on many projects, including The Fountain, Noah, and the National Geographic series One Strange Rock, Welcome to Earth, and Limitless.

“… [M]onsters coming to life and friends on the outs banding together to defeat a larger evil permeate this action-packed series opener.” — Publishers Weekly

“Darren and Ari show that their mastery of storytelling and world creation can extend equally brilliantly to the page. Monster Club is that rare and powerful mix of utter fantasy, humor, realism, and relevancy for these ever-changing times.” — Oliver Jeffers, creator of the NYT #1 bestseller Here We Are

“It’s like my kid-brain exploded on the page. This is exactly the kind of book I would have loved when I was growing up.” — Sadie Sink, star of Stranger Things

"Full of wonder, adventure, heart and humor, Monster Club took me to world a lot like this one but very different and original." — Logan Lerman, star of the Percy Jackson films