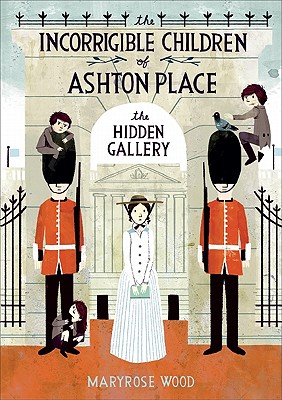 This is book number 2 in the Incorrigible Children of Ashton Place series.

Of especially naughty children it is sometimes said, "They must have been raised by wolves."

The Incorrigible children actually were.

Thanks to the efforts of Miss Penelope Lumley, their plucky governess, Alexander, Beowulf, and Cassiopeia are much more like children than wolf pups now. They are accustomed to wearing clothes. They hardly ever howl at the moon. And for the most part, they resist the urge to chase squirrels up trees.

Despite Penelope's civilizing influence, the Incorrigibles still managed to ruin Lady Constance's Christmas ball, nearly destroying the grand house. So while Ashton Place is being restored, Penelope, the Ashtons, and the children take up residence in London. Penelope is thrilled, as London offers so many opportunities to further the education of her unique students. But the city presents challenges, too, in the form of the palace guards' bearskin hats, which drive the children wild—not to mention the abundance of pigeons the Incorrigibles love to hunt. As they explore London, however, they discover more about themselves as clues about the children's—and Penelope's—mysterious past crop up in the most unexpected ways. . . .

Maryrose Wood is the author of the first five books (so far!) in this series about the Incorrigible children and their governess. These books may be considered works of fiction, which is to say, the true bits and the untrue bits are so thoroughly mixed together that no one should be able to tell the difference. This process of fabrication is fully permitted under the terms of the author's Poetic License, which is one of her most prized possessions.

Maryrose's other qualifications for writing these tales include a scandalous stint as a professional thespian, many years as a private governess to two curious and occasionally rambunctious pupils, and whatever literary insights she may have gleaned from living in close proximity to a clever but disobedient dog.

Jon Klassen grew up in Niagara Falls, Canada, and now lives in Los Angeles, California. He is the New York Times bestselling author and illustrator of several books, including I Want My Hat Back and This Is Not My Hat, for which he won the Caldecott Medal. Two of his picture books have been named Caldecott Honor books: Sam and Dave Dig a Hole and Extra Yarn (winner of the Boston Globe–Horn Book Award), both by Mac Barnett. You can visit him online at www.burstofbeaden.com.

“Another series of uproarious escapades. fans of the first book will be happy to go along for the madcap ride.” — School Library Journal

“[A] madcap sequel. Great fun, and it wouldn’t be optoomuchstic to expect more to come.” — Kirkus Reviews