In Pursuit of the English: A Documentary (Paperback) 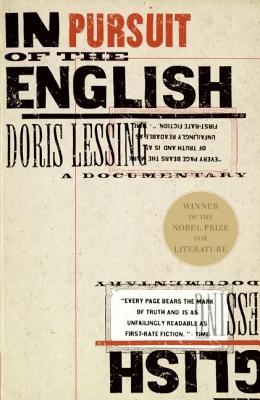 In Pursuit of the English: A Documentary (Paperback)

"One of the most authentic books ever written about the English....Funny, touching and so real that the smell and taste of London seem to rise from its pages." — San Francisco Chronicle

In Pursuit of the English is a novelist's account of a lusty, quarrelsome, unscrupulous, funny, pathetic, full-blooded life in a working-class rooming house. It is a shrewd and unsentimental picture of Londoners you've probably never met or even read about--though they are the real English. The cast of characters — if that term can be applied to real people — includes: Bobby Brent, a con man; Mrs. Skeffington, a genteel woman who bullies her small child and flings herself down two flights of stairs to avoid having another; and Miss Priest, a prostitute, who replies to Lessing's question "Don't you ever like sex?" with "If you're going to talk dirty, I'm not interested."

In swift, barbed style, in high, hard, farcical writing that is eruptively funny, Doris Lessing records the joys and terrors of everyday life. The truth of her perception shines through the pages of a work that is a brilliant piece of cultural interpretation, an intriguing memoir and a thoroughly engaging read.

Winner of the 2007 Nobel Prize in Literature, Doris Lessing was one of the most celebrated and distinguished writers of our time, the recipient of a host of international awards. She wrote more than thirty books—among them the novels Martha Quest, The Golden Notebook, and The Fifth Child. She died in 2013.

"One of the most authentic books ever written about the English....Funny, touching and so real that the smell and taste of London seem to rise from its pages." — San Francisco Chronicle

"A magnificent book, quite staggering in its penetration of the ordinary working-class Londoner's nature." — Cyril Dunn, Washington Post

"Eloquent...Wry and ribald...[Lessing's] impressive gifts for characterization and dialogue, her skill as a raconteur and her tartly humorous style combine to make In Pursuit of the English readable and amusing." — New York Times

"No other writer, from any continent, has this raceless, classless fellowship combined with total physical receptiveness. . . . Lessing has always been more than a regional moral messenger; she is a prospector into the minds, spirit and senses of all, imaginatively at home anywhere." — The Times (London)